Buy the novel and SAVE! 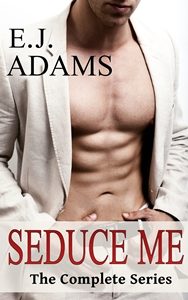 The Seduce Me Box Set is the complete Seduce Me series by E.J. Adams, including the prequel novella Before You Seduce Me.

About each book in the series:

Before You Seduce Me
Alpha billionaire Brandon Mitchell is one of the sexiest men alive. He is also one of the world’s biggest playboys. Often seen with beautiful actresses, super models, and even royalty. But never more than a few times with the same woman. He has rules about the women he sleeps with – don’t fall in love. He has never felt drawn to anyone beyond a purely sexual relationship. Then sweet and smart college senior Ashley Sullivan applies for a job at his fashion magazine. Even though they have never met in person, he is curiously attracted to her. Brandon makes certain that he will meet Ashley. He is confident that he will then seduce her.

Seduce Me: Seduce Me Part 1
When recent college graduate Ashley Sullivan meets billionaire CEO Brandon Mitchell, she is instantly captivated by a man who is handsome, brilliant, and charming. The innocent Ashley is overjoyed when Brandon hires her for a dream job. But Brandon has much more in mind and seduces Ashley. The couple’s physical relationship sexually awakens Ashley and sends her on a journey of discovery. For once Brandon is committed to a relationship, but his past exploits could destroy everything.

Seduce Me Again: Seduce Me Part 2
After being seduced by Brandon Mitchell, Ashley Sullivan embarks on her new life in New York City. Life has gone from promising to amazing. She has a fabulous new career and is building a relationship with the man of her dreams. But it all could come crashing down when Ashley uncovers a secret that Brandon has been keeping from her.

Seduce Me All Over: Seduce Part 3
Ashely Sullivan thought she had it all: a fabulous career and the man of her dreams. But when she is left heartbroken by Brandon Mitchell’s deceit, Ashley must decide if she can trust him with her heart again. While she questions matters of the heart, there is no doubt that she longs for his touch. But could an exciting job offer and a former boyfriend be the life she had always envisioned for herself? Is there anything that Brandon can do to keep Ashley from leaving?

Seduce Me Forever: Seduce Me Part 4
An old boyfriend and an exciting job offer is the perfect escape for Ashley Sullivan. She wonders if it represents the life that she had always envisioned for herself. The only problem is that her passionate desire for Brandon Mitchell is never far from her thoughts. When Brandon unexpectedly arrives to win her back, Ashley finds the thought of being with him irresistible. She agrees to a romantic and erotic getaway to France in hopes of finding a love to last forever. Can Ashley and Brandon find their happily ever after? Or will Ashley discover that a life in Los Angeles is what she wants after all?