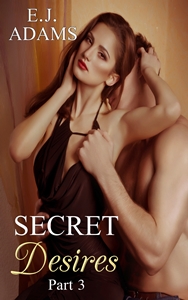 “It’s over. We’re through. I don’t ever want to see you again.” . . . The words echo in my mind and reverberate through the pieces of my shattered heart. How could I have been such a fool? I allowed myself to fall for Dylan Grant. But I was nothing more than one of his sexual conquests. So why am I so conflicted about walking out and ending it all with him?

Jessica Nichols is left heartbroken and humiliated by Dylan Grant after they act on their secret desires for one another. She is determined to move on and forget that she ever met the bad boy billionaire. But when she is honest with herself, a piece of Jessica still longs for the Dylan Grant who swept her off her feet on Catalina Island.

Dylan is just as conflicted. Old habits are hard to break, but he was surprised at his feelings for Jessica. When she discovers more about his sexual exploits and leaves him, Dylan must decide whether to let her go or change and try to win her back.

And then there is Logan Price. It turns out that he is interested in Jessica. After spending time with him, Jessica begins to wonder if she gave in to the secret desires for the wrong man earlier. But Dylan may not be willing to let go so easily. Maybe Jessica can’t either.